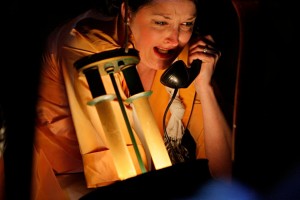 by SOPHIE KERMAN
Although witty, suspenseful and well-acted, the Jungle Theater‘s latest production is not a Valentine’s Day offering for the insecure couple. As you get sucked into the detective work and criminal reverse-engineering that drives Frederick Knott‘s Dial M for Murder, you may find yourself glancing sideways at your date and wondering just how much they might stand to profit by your death – and that is exactly the fun of this tightly-woven mystery.

In an interview conducted several years before his death in 2002, Knott claims there are two types of thrillers: the whodunnit, which “appeals to one’s curiosity,” and suspense plays like his, which are “based on anxiety.” Here, our anxiety centers around a question posed in the first act: “Do you really believe in the perfect murder?” Former tennis champ Tony Wendice (the sociopathically-charming Michael Booth) has planned his crime down to the last detail. But as TV detective writer Max Halliday (Terry Hempleman, who seems to be channeling Humphrey Bogart with varying degrees of success) says: “In stories things turn out as the author plans them to… In real life they don’t – always.” When Wendice’s plan goes awry, we are torn between wondering whether he’ll find a way to talk himself out of an increasingly sticky situation and biting our nails in sympathy for Wendice’s utterly clueless wife Margot (played with well-calibrated earnestness by Cheryl Willis). As Inspector Hubbard, Gary Briggle holds his cards so close to his chest that he manages to keep us guessing until the very last moment.

Because Dial M was such a hit when it opened in 1952, Knott later adapted it into the 1954 Alfred Hitchcock movie of the same name. Though you might be tempted to stay at home and rent the movie (or its 1998 remake, “A Perfect Murder”), there is a lot to be said for watching it live. Without a cinematographer’s camera to guide your attention, the entire stage is open to scrutiny, and the Jungle’s design team has accounted for every last detail, from the books stacked beneath the coffee table to the ivy you can just barely glimpse through the living room window. Since the plot hinges on the meticulousness of Wendice’s well-laid plans, the fun of the live performance is not only in trying to stay one step ahead of the characters’ ingeniousness, but in admiring the precision of the Jungle’s seamlessly-executed production. (The scene changes, intricately choreographed and executed in near-blackness by interns Christopher Knutson and Zachary Schaeffer, are practically worth the price of the ticket.)

This play is performed with two intermissions, which is normally a red flag for an overly-long production. But the breaks in the action – and the room they leave for speculation – actually heighten the dramatic tension, and thanks both to the fine acting and the smooth direction by Bain Boehlke, the play never feels long or boring. Since the audience is in on the plot, we are invested in the outcome. As each piece of the puzzle is put together, taken apart, and re-assembled in a different configuration, we place our bets on the criminal mastermind or the supersleuth, following their maneuvering as we would a game of high-stakes Clue.

The Jungle, located in the heart of the Lyn-Lake neighborhood in Minneapolis, is the perfect excuse for an evening out. After a tasty dinner at one of the many restaurants within walking distance of the theater, you and your date can match wits with the Wendices… as long as neither of you was planning to marry for money. Come to think of it, you should probably split the tab on that dinner just to be sure.

One thought on “Dial M for Murder”