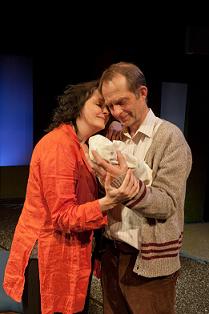 by SOPHIE KERMAN
Kill Me Don’t Go, a brand new play by Trista Baldwin, does not shy away from marriage’s most harrowing moments. Ambitious in its emotional scope, Kill Me explores the profound connection and dangerous interdependency that can develop between two people who have chosen to wind their lives around each other.

Although the situation between Marcella (Cheryl Willis) and Richard (Patrick Bailey) devolves from comfortable co-existence to fantasies of murder, Kill Me is not a story with a traditional plot arc. Interspersed with dream sequences and inner monologue, Bailey’s script blurs the line between “real life” and what is happening inside each character’s head. Depending on your taste in theater, this will be either a source of confusion or one of the play’s most interesting qualities. To me, the choppy narrative represented the way our inner lives – our emotional and spiritual sides – can manifest themselves as tangible reality even when the situation is objectively quite different. In a lecture on animism, Richard, a university professor, mentions that “Everything that is alive has spirit.” Baldwin’s script presents the opposite: everything that has spirit is alive and present on stage.

The problem with staging an individual’s psychological state is that, as we all know, our thoughts are often irrationally extreme and rapidly changeable. Under Leah Cooper‘s direction, the production ventures into an unsustainable level of intensity too often and for far too long, resulting in performances that often come across as shrill when they are meant to be heartfelt. Marcella’s character, in particular, suffers from this treatment: while her complaints about Richard’s lack of investment in their family seem to be based in fact, her all-or-nothing responses to even the slightest inconvenience make our sympathies lean heavily toward Richard’s emotional retreat.

For all of the psychological exploration that the play attempts of its main characters, its secondary characters lack some depth and cohesion. Richard’s assistant, fawning college student Ethan (Neal Skoy) is realistically and humorously awkward, but his character seems to exist solely to provide a second-act plot twist that never comes to fruition. Joy (Sara Richardson), the babysitter, plays a more active part in Richard and Marcella’s marriage dynamic, but her character is an inconsistent bundle of hipster tropes. From the spacey, free-spirited artist to the jaded loner with a different partner every night, Joy seems to be trying to embody several different life philosophies at the same time.

Despite some inconsistencies, there are moments that ring very true in the play. A clumsy sex scene behind the couch provides a much-needed comic edge to the couple’s desperate need for companionship, and Act II opens with a darkly funny take on the times when the only way to maintain our outer composure is by imagining brutal acts of violence. Those scenes, and others like them, crystallize Baldwin’s message so well that some of the less polished scenes seem superfluous. What felt ungainly as a two-act play could, with some judicious edits, become a sharp, biting foray into one couple’s inability to live with or without each other.