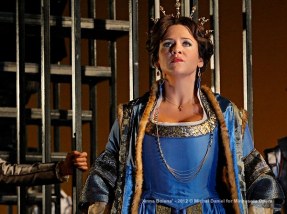 Anyone with a glancing knowledge of British history knows all does not end well for Anne Boleyn.   Anne was Henry VIII’s second wife (“divorced, beheaded, died; divorced, beheaded, survived”), and, after specious charges of adultery and treason, spent her last days before execution in the Tower of London.  Gaetano Donizetti recognized a good story and penned three operas that deal with the Tudor period.  “Anna Bolena” is the last in the trilogy that includes “Roberto Devereux” and “Maria Stuarda” (both also staged by the Minnesota Opera).

From the first scene, the drama is worthy of a Spanish soap opera. The curtain opened on a lonely Anna Bolena (Keri Alkema) despairing over her husband’s hatred for her.  She’s comforted by Giovanna Seymour (Lauren McNeese), who is conflicted and guilty about her affair with Anna’s husband, the king Enrico VIII (Kyle Ketelsen).  She knows she is no longer a true friend to Anna, but cannot admit her betrayal.  When the king returns, Giovanna convinces him to restore her honor by making her his wife.  She doesn’t realize (or is to naive to recognize) that Enrico VIII does nothing in half measures and that her demand will be paid with Anna’s death.

Smeton (Victoria Vargas), the queen’s page, is called upon to play a song to take Anna’s mind off her despondency.  Mark Smeaton/Smeton is a lesser known figure in the intrigue, condemned to torture and then death because of a conversation with the queen in her bedchambers.  In the 17th and 18th centuries, a role like Smeton’s might have been played by a castrato; boys were castrated before puberty to prevent their larynx from transforming in order to maintain a higher vocal register.  This subjugation had ended by Donizetti’s time and those kinds of roles were replaced in some operas by travesti, actors portraying characters of the opposite sex.  Donizetti’s Smeton is a contralto role and, for this production, performed by Victoria Vargas. A true contralto is rare and Vargas, though quite good, didn’t move often to the contralto lower end.  Vargas provided a pleasurable middle range for the dynamic highs of Alkema and McNeese, and the rich and rumbling bass of Ketelsen. The orchestra, conducted by Michael Christie, expertly foregrounded those vocals. 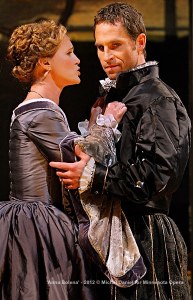 Along with contemporaries Rossini and Bellini, Donizetti composed operas in what is now called the bel canto style.  Though the term bel canto remains open to some interpretation (its translation is the ambiguous “beautiful singing” or “beautiful song”), it’s generally understood to apply to those melodious operas of the early 19th Century and a certain style of singing that values fluid production throughout the entire vocal range.  With long, elegant lines and its lyrical recitatives, “Anna Bolena” is an excellent example. And Keri Alkema was stunning, smoothly and seamlessly moving from lower to higher registers.  There was a robustness at the lower end of her range that poignantly expressed sadness and anguish, and was both complemented beautifully by Lauren McNeese’s brighter tones and provided a compelling texture in her duets with Ketelsen.

The stage direction by Kevin Newbury was excellent.  From the staging of the asides to the recitative arrangements, the spatial interplay amongst the performers increased the dramatic tension.  Some creative acting directions (e.g. Smeton on the queen’s bed holding a pillow) enhanced the characterizations.  And the costumes by Jessica Jahn were superb.  Anna’s vibrant blue dress was jewel collared with floral embroidered cuffs, and the folds and undersleeves of Giavanna’s violet gown hung luxurious and heavy (both styles were common in the period).  These contrasted effectively with Enrico VIII’s embroidered black doublet. 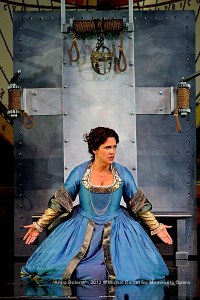 Neil Patel’s set was safe, but intelligible; columns descended from the ceiling to form rooms, and a dais with a bed on one side and a throne on the other revolved between scenes.  Patel also made some inspired choices, including a dark metal stairway rising away from the stage for Enrico VIII’s elevation and surveillance, and a torture rack reminiscent of the devices in the Tower of London that refused to let us forget the real world fate of Anne Boleyn.

But I felt like I missed something with D.M. Wood’s lighting.  There were some quite moving structures.  For the opening of Act II, the curtain is half raised and nearly transparent, revealing a ghostly blue backdrop behind a prison of benches containing Anna and her maidservants (after her banishment to the tower). The effect is sobering.  The casting of shadows in some scenes was also interesting, though I was unable to determine if their use was intended as a visual leitmotif.  And I was baffled by the monochromatic squares that expanded and collapsed behind the performers during some sequences.  The saturations were at odds with the set and costumes, and the red and green backdrops seemed to be a discordant modern touch in an otherwise period staging.

Wagner complained about bel canto, considering it vapidly lyrical, emphasizing vocal niceties and devoid of vibrancy (but he also denied the influence of bel canto on his own work).  These are descriptions that are neither true of this opera nor of this production.  Donizetti’s representation of the tragedy is harrowing and the performances are impassioned.  The Minnesota Opera extends its track record of excellent Donizetti productions with this staging of “Anna Bolena.”