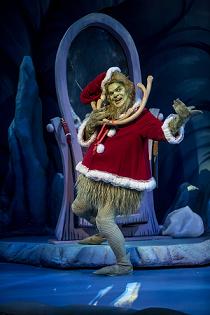 by SOPHIE KERMAN
I look for two things in a children’s show: first, that the kids like it, and second, that it’s got something to entertain adults, too. The Children’s Theatre Company leaves no doubt about either in its revival of the holiday favorite, Dr. Seuss’ How the Grinch Stole Christmas. It’s a book most Americans have known and loved since childhood, but the CTC presents it in such a vibrant and energetic way that even adults will find themselves hooked.

But first, the kids. At the Sunday matinee performance, the theater was packed with little people who were transfixed by the bright colors and big performances on stage. Although I remember the literary Grinch as delightfully menacing, Reed Sigmund plays the on-stage Grinch as more grouchy than creepy, a choice which is just right when bringing the character to life in front of young audiences. (The play’s more suspenseful moments might still scare some of the very youngest spectators, but the production is generally good at diffusing tension with slapstick.) Sigmund’s Grinch is a ham in the best way, particularly his infectious glee as he packed away the Who household’s Christmas decorations.

There were only a few rare moments when the action lagged, and those were mostly during H. Adam Harris‘s narration as Old Max, the Grinch’s now-aging dog. Harris’s oratorical voice was trained for Shakespeare, not for Dr. Seuss, and there are times that Seuss’s rhythm gets lost in the Harris’s declamatory tone.

But if the narration occasionally dragged, my attention rarely wavered, thanks in large part to the production’s amazing stagecraft. There are no less than four different sets in this 75-minute play, each one based on the bright, cartoon-like drawings from the book. Tom Butsch’s sets, with Rebecca Fuller Jensen‘s lighting and David Kay Mickelsen‘s cute – but not cutesy – costumes, create a world that is nothing short of magical. (And part of that magic is the lightning speed and seamlessness of all the set changes! Wow.)

The emotional arc of the play will also charm both kids and adults. Second-grader Natalie Tran‘s performance as Cindy-Lou Who is perfectly sung, and her appeals to the Grinch are sweet and sincere. The entire ensemble makes a dynamic team, and the director, Peter C. Brosius, knows how to cater to kids without being saccharine or condescending. The music, by Mel Marvin, is also oddly catchy – I can still remember some of the tunes, which is not something I often say of a musical.

As a side note, the politically-liberated someday-parent in me registered some disappointment that all the Who girls wanted dolls, while all the Who boys wanted toy soldiers. But that’s just a minor quibble next to a really solid, fun interpretation of a great story. It’s the perfect Christmas outing for anyone looking for a more creative, upbeat take on the traditional holiday fare – and if you don’t have kids, it doesn’t matter; there will be plenty of them in the audience to remind you where the funny, touching, and exciting parts are.