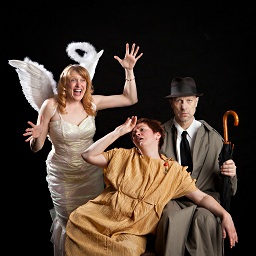 by LIZ PANTING, guest reviewer
Girl Shorts is a festival of short plays all written by women playwrights, focusing on female characters. Each night of the festival, which runs from February 23-March 3, features 5 one-act plays, and certain evenings also feature live music after the show by Missing Peace, Lingua Luna, and Courtney McLean of the Dirty Curls.

The impetus for such a festival? In 2002-2003, a study of more than 2,000 productions at 357 American theatres showed that only 17% of productions were written by women and only 22% of those shows had female directors. Theatre Unbound, who is producing Girl Shorts, has taken improving those statistics as its modus operandi.

The beauty of a production of several one-act plays it that there is probably something for everyone – comedy, drama, movement-based work – and if you don’t care for one of the pieces, you don’t have long to wait for another one.

The two strongest pieces of the festival act as book-ends for the evening. Opening the show, Medea by Wendy Wasserstein and Christopher Durang pokes fun at the minimal stage space allowed to women in classical theatre. Producer Stacey Poirier doubles as the titular Medea, and is hilariously ironic as she throws her arms up in the air, moans in agony, throws herself to the ground, and cries to the heavens to send her a deux ex machina, while a skeptical Chorus (Charla Marie Bailey, Jen Johnson, Lacey Zeiler) acts as a kind of peanut gallery that speaks in unison. Medea pokes fun at Greek tragedy, female roles in theatre, the trope of the jealous woman, and, well, everything it can in such a short period of time.

The show closes on a much more somber note with The Obligatory Scene (written by Carolyn Gage), a play in which a lesbian couple come to terms with a major crack in the foundation of their relationship. Vivey (Victoria Pyan) and Dru (played so convincingly by Noë Tallen that I wanted to go give her a hug) struggle to see the world through each other’s eyes and avoid the “obligatory scene” of a break-up. Poignant and thought-provoking, it leaves us uncertain whether the couple will stay together or not – and, for that matter, whether they ought to even try.

Other plays include: Lost, a story of two middle-aged women trying to make it to a theatre outing; this play leaves you wondering if it is a commentary on the way women are so frequently represented in pop culture as mysterious, bizarre, inexplicable creatures, or whether it is just a quirky story of forgetfulness. Within is a “site-specific” creative-motion piece created by Anne Bertram and Heather C. Brady. I’ll admit that as the scene opened, I thought I was in for another parody of “modern art”, but in fact, it was quite serious. It turned out to be very compelling, though, with wordless characters expressing their struggles entirely through movement. Within will leave you nodding your head in understanding and contemplating your own internal struggles.

The Judge’s Wife, written by Caryl Churchill in 1972 England, depicts a husband and wife who either share identical political beliefs or are on the opposite sides of the spectrum – which is a matter of interpretation. Well-acted and cleverly staged, the flaw of this piece is that the context (where is it set? when? why?) sometimes distracts from the larger message of the story.

Overall, Girl Shorts is a wonderful experience. The staging is simple, as are the costumes, and the movement from comedy to oddity to drama may be a bit unsettling at moments, but overall it is an enjoyable experience. For a festival based on women writers and women-based stories, it does a remarkable job of not feeling heavy-handed in its mission. There is absolutely something for everyone in a single evening, which is impressive. You may not cry, but you’ll laugh, you’ll ponder, and you’ll be glad you came.

One thought on “Girl Shorts”