Mission Theater promises that its production of Shakespeare’s A Midsummer Night’s Dream is a “highly physical, energetic production”, and they aren’t lying. From start to finish, the play is bursting with energy. Characters dance, fight, frolic, and do just about anything but stay still. Australian director Penelope Parsons-Lord cleverly decided to use physicality to help interpret the play (useful for those of us not fluent in 16th century poetic English..). 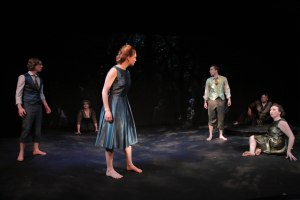 If you aren’t familiar with the Bard’s work, Mission Theater describes the plot of A Midsummer Night’s Dream: “Boy loves Girl. Girl is engaged to another. Boy meets Girl’s friend. Girl’s friend has the hots for Boy’s friend, who is engaged to Girl. Everyone runs away into a fairy-infested wood. Antics with an ass ensue.” Does this sound complicated and silly? It is; wonderfully so. It is a delight to watch – Mission’s production makes the plot particularly comprehensible and the multi-talented Penelope Parson-Lord’s costumes are lush and bright, making this production a real treat for the eyes.

I really enjoyed this play, but it definitely has its flaws. There were a few flubbed lines, a couple of prop malfunctions, and a missed music cue, but on opening night, these can be forgiven. The setting of the opening scenes, however, is not easily overlooked. Shakespeare set his play after the mythical war between Athens and the Amazons; conquered Amazon queen Hippolyta is forced to marry Athenian leader Theseus. Being myth, it would be hard to assign this to a particular date, but Mission Theater’s production seems to be set right after World War II. Now, perhaps this is because WWII is the modern war most recognizable to us today, and perhaps this is because someone wanted to put that distinctive 40s wave into all the women’s hair, but it confused me. Considering how vague Shakespeare’s text is about when it is set, placing it in a specific time suggests a very deliberate choice, and the reasoning behind this choice is unclear.

Another other qualm with this production was the insertion of some new dialogue without an attempt to blend it in; after scenes full of “wouldst thou” and “I knowest thee”, it is incredibly jarring to hear phrases like, “Some party last night, hey?” This only happens a couple times, but when it does, it feels wildly out of place. Finally, there is a timing problem when it comes to scene and act endings; sometimes lights fade and it isn’t clear whether you ought to applaud and get up, or stay seated and silent, waiting for more. This is particularly true at the end of the play; characters exit the stage one at a time in a very final way, and if you don’t know that Puck has a few more lines to deliver, you couldn’t be faulted for assuming the play was over.

Mission Theater’s production is supplemented by an original score by local musicians Joe Gamble (Enemy Planes) and Al Church (Clustercuss & Al Church and State), which helps transform the theatre into a whole other world. The set (by Craig Fernholz, John Sylvester and Cory Fox) is clever; plain until the fairy forest appears, at which point I actually gasped at how beautiful it was.

The play’s greatest strength lies in its cast. Each and every one is fascinating to watch, and I commend the casting choices. Michael Kelly as both Theseus and Oberon is lustful and seductive, and Andrea Rose Tonsfeldt as Hippolyta and Titania is wonderfully sensuous and imperious. The male lovers (Brennan Blickhan as Demetrius and Matt Ouren as Lysander) are comical, and the female lovers (Abby DeSanto as Helena and Anneliese Stuht as Hermia) change seamlessly from lustful to angry to confused. Victoria Pyan as Puck is pure genius; constantly moving, sometimes playful, sometimes angry. The fairies are lovely, light, delicate, and quick – just as you imagine fairies to be, and the players of the play-within-a-play are hilarious, particularly Craig Fernholz as the pompous Bottom and Alec Barniskis as the awkward Snug/Lion. There are some twists in the casting: Hermea’s father Egeus is actually her mother (a strict, detestable Amanda Johnson) and Puck is a woman; characters come in different shapes and sizes – and none of these choices seem ill-made, because each actor plays their part wonderfully.

Mission Theater’s A Midsummer Night’s Dream is not without its problems, but overall it is beautiful to watch, hilariously delivered, and true to Shakespeare’s text without being one of the stuffy productions that so many people imagine when they hear the Bard’s name. That said, to those of you who are on the larger side (if you struggle with the seatbelt in an airplane), beware: the seating in the Gremlin Theater in St Paul is cozy; as a big woman, I felt a little squished into my seat and had very limited leg room. But it was absolutely worth being a little squished. This production made me laugh more than any Blockbuster movie in recent memory.

One thought on “A Midsummer Night’s Dream”