To continue my weirdly thematic Fringe experience, today I saw three plays about the things you can learn when on a journey. From the underworld to ancient Greece to contemporary immigrants, the who and the where seems less important than the what: a lot of truths get revealed when you put yourself in a different place. Not to get too meta-theatrical, but this is just why  I love to go to the theater – to take a little trip someplace else, put myself in someone else’s shoes, and see some familiar ideas from an entirely different perspective. 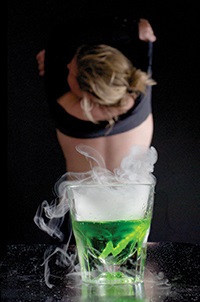 Elysium Blues by Jessica Huang takes the story of Orpheus and Eurydice and turns it into a psychological exploration of the women in Greek myth. Told through soulful music by Eric Mayson (who also plays the role of Orpheus, in a much more challenging and compelling interpretation of the character than any I’ve seen before) and rhymed text with the feel of spoken word poetry, the play sucks the audience into a world where the painful memories behind traditional mythologies are allowed to rise to the surface. Rachel Austin‘s vocals shine in the role of Eurydice, and Rebecca Wall also stands out as Persephone, the queen of the underworld who struggles to retain her sense of independent authority. Performed in the Rarig Xperimental space, this production melds good music, strong vocals, and a smart interpretation that fits perfectly into its time slot. Though audiences might choose a “safer”, more familiar style of show, here’s hoping this one packs the house this week.

CIRCE! A Musical Odyssey, at the Illusion Theater, is another musical retelling of Greek myth from a female perspective. Unlike Elysium Blues, CIRCE takes a comedic approach to its subject matter, imagining what would happen if Circle left her island to chase after Odysseus on his way back to Ithaca. It’s a fun show with a retro aesthetic, some clever comedic bits, and catchy tunes by Joseph Yé. The ensemble works well together, and the friend bonding on Circe and Hecate’s sea-trip is surprisingly charming, for what is otherwise a funny and light-hearted trip around the Mediterranean.

In Tizi Ouzou, we cross the Mediterranean to deal with some contemporary source material, rather than legend. Creator and actress Taous Khazem has drawn on her own experiences as an Algerian/Berber-American to write a play about the experience of immigration from different sides of the water. Khazem wears many hats and shoes in this play, portraying a cast of Algerians in both Paris and Tizi Ouzou (a northern Algerian city) who reflect on those who have left Algeria, those who have returned, and those whom they may never see again. Some of her monologues are short and pointed, while others are more reflective, but all are clearly drawn and portray so many different perspectives on immigration that it is impossible, in the end, to come down clearly on one side or the other. Thought-provoking, lyrical and acted with heart, Tizi Ouzou (at the New Century Theatre) sets a high bar for what solo theater can accomplish.

Sophie, Liz, and Melanie will be posting their thoughts throughout Fringe (August 1-11). Be sure to check back as we update with more shows!