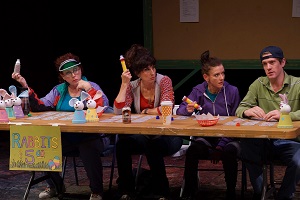 by SOPHIE KERMAN
David Lindsay-Abaire‘s Good People is a funny, scathing commentary on class privilege – but not for the reasons you might expect.

Set in South Boston, Good People sets itself up as an answer to the classic question of whether social mobility is based on the all-American ideals of intelligence and hard work, or whether you still need a few lucky breaks to get out of a tough neighborhood. Fifty-year-old Margie (Virginia S. Burke) has just been fired for lateness, due in no small part to her developmentally disabled adult daughter. With no one to turn to besides her penny-pinching landlady (Jane Hammill) and best friend Jean (Angela Timberman), Margie decides to track down an old boyfriend who made it out of Southie and has set up a lucrative practice as a physician. Through Margie’s conversations with Mike (James Denton) and Mike’s ultra-bourgeois wife Kate (Hope Cervantes), Lindsay-Abaire’s script explores the barriers to climbing the social ladder and whether it is truly possible to pull yourself up by your own bootstraps.

Good People delivers on a lot of its promises, particularly when it comes to the production’s fine acting. Burke plays Margie with a dynamic physicality that seems to be fueled by the character’s own desperation. Her scenes with Hammill and Timberman, particularly in the first act, have a wry humor and natural camaraderie that brings the audience into a world where a $9.20/hour job means the difference between being able to hire a babysitter and having to live on the street.

Though he doesn’t get much stage time, Sam Pearson also draws a lot of nuance from his role as Margie’s former boss. In a neighborhood where no one has it easy, Pearson makes it clear that this isn’t a simple question of worker exploitation, but rather an economic web where job security and human generosity are sometimes at impossible odds. 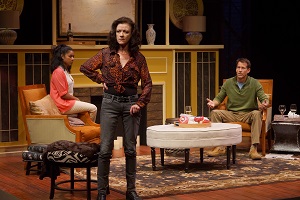 It is when Margie encounters Mike – and particularly in the second act, when she goes to Mike and Kate’s richly-decorated house in upscale Chestnut Hill – that it becomes painfully obvious that Good People‘s social critiques come with a high price. From the very beginning of the second act, when Kate mistakes Margie for a caterer, the play’s sense of humor slides from knowingly dark to uncomfortably patronizing – and as an audience member, my focus shifted away from the actors and onto the people around me. The primarily upper-class patrons of the Park Square Theatre laughed uproariously at Margie’s “quaint” moments of culture shock when faced with Mike’s wealth. How unbelievably funny that Margie doesn’t recognize cheese that doesn’t come from the Cracker Barrel! How hilarious that she doesn’t know anything about red wine!

Although the focus of our laughter is certainly on Margie in this production, I’m not sure that it needed to be. Hope Cervantes plays the role of Kate, Mike’s wife, with a Stepford-like hospitality that makes her hard to laugh at; under different direction, however, I could easily imagine her character’s bitter, bitchy comments being a welcome addition to the play’s pointed humor. It would have been a relief to be invited to laugh at the rich folk, too.

In this play, context really is everything. It seemed like Joel Sass made an interesting directorial choice in the first act by juxtaposing Margie’s loose physicality with Mike’s stiff, buttoned-up professionalism. But put Margie in Mike’s living room, with her desperation to find a job being eclipsed by laughter largely at her expense, and all of a sudden these interesting choices and highly trained actors look like nothing more than a minstrel show for the Twin Cities elite. We are laughing at class here, not race, but in this context, Margie’s uncontained personality becomes such an object of the play’s ridicule that she may as well have been in blackface.

Although racial humor is thankfully passé in the local theatre scene, it is shameful that it continues to be socially acceptable for privileged audiences to get their belly laughs at the very real situation of the urban poor. Yet I still might recommend going to see Good People, since the show does offer some truly top-notch acting, impeccable comic timing, and a glimpse at the sort of biting commentary this play could have been. And though this is not the type of social awareness Lindsay-Abaire was going for, the production offers a striking window into just how deeply ingrained our social inequalities are. You’ll see: just listen to the audience.

One thought on “Good People”