By LIZ BYRON. There is nothing particularly groundbreaking about Yellow Tree Theater’s holiday season production. On the other hand, something doesn’t have to be groundbreaking to be good, and A Hunting Shack Christmas is very good. It’s got a compelling plot, it’s funny, it’s got enough heartwarming moments to give you the warm fuzzies but not so many as to be sickly sweet, and it has a lot of moose-inspired decor and lutefisk references. It all adds up to a great, entertaining show. 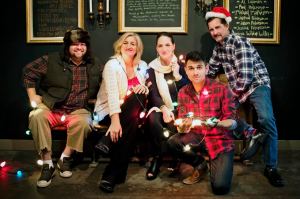 The cast of A Hunting Shack Christmas.

An original play by local playwright Jessica Lind Peterson, (also known for the successful Miracle on Christmas Lake plays) A Hunting Shack Christmas tells the story of Charlie who, on the eve of his tenth wedding anniversary, heads up north to his hunting shack to reassess his life. To his surprise, he arrives to find his shack occupied by his estranged uncle, Big Paul, Paul’s girlfriend June, and June’s grown son, Ham. An ill-timed snowstorm leaves the whole group stuck together to try to settle their differences and enjoy Christmas.

A very Minnesotan Christmas it is, too; krumkake, lutefisk, massive snowfalls, moose, blonde people saying “you betcha”, and all. If that sounds like fun to you, you’ll love this show. Similarly, it’s stuffed to the brim with Christmas spirit, and if that’s your thing, even better. A Hunting Shack Christmas centers on themes of following your dreams, the importance of family, and the strength of love.

It might all be too much, but Peterson’s script is witty and clever, and moves at just the right pace. The cast is… well, they’re great. Sasha Andreev as Charlie is angst-ridden, and Daisy Macklin Skarning as Jen is sympathetic as his confused, fed-up wife. Meanwhile, John Hayes as Big Paul is perfectly curmudgeonly, but the show is really stolen by Jason Ballweber as Ham, who is wonderfully ridiculous and obnoxious, and Greta Grosch as his mother, June, the walking cliché of the loud, overbearing mother — hair rollers, homemade krumkake and all.

Now, as I’ve said, it isn’t a show for everyone — if you don’t like it when people wish you “Merry Christmas”, or when people joke about saying “oh yeah, you betcha” in a Minnesotan accent, you’d be better served to spend your time and money elsewhere. But for those Christmas lovers, this is a wonderfully written, wonderfully executed production. Word has it that tickets are going fast (no big surprise, having seen it) so it’s time to bite the bullet and go!