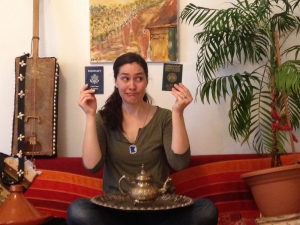 How do you navigate the cultures of the Middle East and America’s heartland as an Arab-American experiencing an identity crisis? A trio of plays by impressively talented local Arab-American playwrights and artists explore this theme and are showcased this week through July 12 at Mixed Blood Theatre. The festival is organized by a group of  Minneapolis-based artists of the New Arab American Theatre Works company to “give new perspective to the general Twin Cities public when thinking about the meaning of  “Arab,” “Middle Eastern,” and “Muslim.” As a Lebanese-American Minnesotan, I could identify closely with the characters and cultural subtext in all three plays I attended: Road to the City of Apples; A Clown in Exile; and In Algeria They Know My Name.  But the themes of exploring one’s heritage, adapting to a new home and relying on friends and family as personal touchstones are universal. The festival is well worth attending.

Two of the three plays offer a deeply personal, and in one case, largely autobiographical, look at the wrenching pull of opposing cultures, mixed identity and the American dream. I say opposing cultures because I have often felt the dichotomy between the “Minnesota Nice” culture I live in and the emotionally charged, in-your-business culture of the Lebanese village I visit. I loved Taous Claire Khazem’s brave, one-woman “95 percent” autobiographical performance in, In Algeria They Know My Name.  Minnesota raised Taous Khazem travels to her father’s homeland to work as a theater artist and falls in love with an Algerian performer. She begins her story by describing what it was like to grow up in Minnesota with a Algerian name that is difficult to pronounce in Minnesota but common in Algeria. She has a fascination with all things Algerian and jumps at the chance to attend a wedding with her father in his homeland. She weaves in her father’s confusing attempts to teach her about her culture, her frustration at misunderstanding the cultural clues and “doing everything wrong” in her new husband’s family home, while adjusting to the language, career, political and social barriers that prevent her from being fulfilled and happy. Khazem cleverly uses storage bins as her set and isn’t afraid to bust a move or two when describing her Algerian wedding reception. Most inspirational to me were her ambitious and mostly successful attempts to attract more women to the Algerian stage during a period of political upheaval in the country.

Road to the City of Apples by Kathryn Haddad (directed by Pangea World Theater’s Artistic Director Dipankar Mukerjee) tells the story of Ahmed (Jawdy Obeid) and Khairy (William Nour) – two undocumented Palestinians on a road trip/escape from New Jersey to Wisconsin. Haddad captured what is to me a quintessential Arab friendship – superficially angry and sarcastic clashes of opinion overlaying a deep loyalty and respect for each other’s humanity. The dialogue between the two friends rang so true to me I found myself transported back to my father’s porch as neighbors debated the issue of the day. First-time actors Obeid and Nour offered remarkable and wonderfully real, poignant performances. Haddad also effectively weaves in Palestinian humiliation under Israeli occupation with the difficulties of achieving the American dream and freedom as an undocumented immigrant.

Algerian Mohammed Yabdri (real-life husband featured in Taous Khazem’s play) created and performed in the third play A Clown in Exile, a sometimes audience interactive clown act — with rubber chickens and lots of physical humor — that portrayed his struggles to find a place to call home.

A Clown in Exile, created by Mohammed Yabdri with Noah Bremer. In Algeria They Know My Name by Taous Claire Khazem, director and dramaturge Zarawaar Mistry. Road to the City of Apples by Kathryn Haddad, directed by Dipankar Mukherjee. Festival runs June 26 – July 12, 2015 at Mixed Blood Theatre, 1501 S.4th Street, Minneapolis, 55454. Dates, showtimes and details at www.newarabamericantheatreworks.com. Tickets: Free if you live in 55454 area code or $15 a show, $35 3-show pass, $25 2-show pass, cash or cards at the door, a limited number of economic accessibility tickets available at the door. Purchase tickets in advance tickets at Brown Paper Tickets.