By LIZ BYRON. It’s pretty simple: if the thought of pirates mixing in singing and dancing with their swashbuckling doesn’t sound awesome to you, then… well, first of all, I think you’re crazy. But second of all, you should probably stay clear of the Ordway between now and August 16, because their production of The Pirates of Penzance is chock full of well-choreographed piratey songs. Heck, even the drinks at the bar are pirate-themed, and the ushers are gussied up pirate-style. All pirates all the time here, folks. So, seriously, pirate-haters beware. And everybody else, get your tickets now because this show is so much fun.

Of the fourteen comic operas written by the team of Gilbert and Sullivan — that is, composer Arthur Sullivan and librettist W.S. Gilbert — The Pirates of Penzance remains one of their most popular. It’s easy to see why; even 136 years after its debut, Pirates is silly yet clever, fast-paced, and entertaining. The music is catchy, too. Even if you’ve never seen anything from the Gilbert & Sullivan oeuvre, I guarantee that you’ve heard some form of the “Major-General’s Song”, even if only as a tune to which to sing all the elements of the periodic table. Pirates is a two-act comic opera (don’t let the word “opera” scare you off; you don’t have to like opera to like this one!) about a young man named Frederic who, after being accidentally apprenticed to a band of pirates, has finished his training and is finally free to leave the ship and find a more honest lifestyle. Our young hero falls in love with a young woman named Mabel, only to find out that he might not be entirely free of his pirating past, and complications and mayhem ensue.

There are parts of the show that made me cringe: Frederic’s childhood nanny, Ruth, is the butt of a lot of jokes for being “too old” to be attractive, and Frederic is quick to cast her aside when he sees younger, presumably prettier girls. Hearing an entire audience laugh when one character turns out to be gay makes me wince — why, in 2015, do we still have to use homosexuality as a punchline? And while I appreciate that the cast was not all white, it was mostly white. But to be fair, those first two complaints are typical of any older script, and the third is a concern I have with the larger Twin Cities theatre community, not just this production (and this one was better than many). 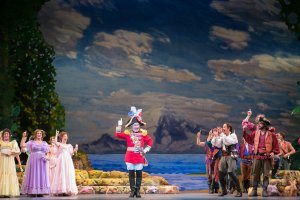 Typically you go to the theatre to be entertained, and Pirates is undeniably entertaining. The Ordway‘s production is bright, loud, and sassy. James A. Rocco (direction and choreography), Lisa Bartholomew-Given (associate director/choreographer) and Aaron Preusse (fight choreographer) keep the characters constantly on the move; the dance and fight moves are slick and hilarious. Cartoonish, but somehow elegant. In an ingenious move, there are two walkways crossing over the orchestra pit, allowing characters to walk/dance/swordfight/march not just around the pit, but across it, which adds a really cool dimension of movement.

Kudos to scenic and lighting designer Tom Struge and props designer Rick Polenek, whose sets and props are colourful and cartoonish — the program compares them to “pop-up books”, which is apt. They’re fun enough to light up the stage, but not complicated enough to distract your eyes from the action. Meanwhile, costume designer Lynda L. Salsbury has dressed the entire cast in bright colours and patterns.

The songs are beautifully performed, and under Steve Tyler‘s musical direction, the music is a little showier and Broadway-esque than other performances of Gilbert and Sullivan that I’ve seen, which adds a little oomph. Casting director Reid Harmsen is to be applauded for having chosen such a talented cast; Hunter Ryan Herdlicka as Frederic is the perfect leading man: dashing, righteous, and passionate. Anne Eisendrath as his paramour, Mabel, is sweet and manages some amazing vocals. The real show-stealers, though, are Gary Briggle as Mabel’s father, the Major-General, is essentially a real-life cartoon character. He is so over-the-top and self-important that just walking across the stage elicits laughs from the audience. And how to express the wonderfulness of Brandon O’Neill‘s Pirate King? Admittedly, you’d have to do something really wrong not to be most people’s favourite character, because, I mean, it’s right there in the title – PIRATE KING! But O’Neill is just perfect. Cocky, gleeful, and flamboyant, he just draws all eyes to him, and it’s not just the close-fitting stripey pants.

There were a couple of times when the lyrics were hard to make out; notably, the opening number (Pour, Oh Pour, the Pirate Sherry) with all the pirates celebrating, Oh, Dry the Glistening Tear when the Major-General’s daughters find him up late, weeping one night, and to a lesser extent, in Stay, Frederic, Stay! when Frederic and Mabel vow their love to each other. That said, the choreography is so animated that the meaning of the songs were clear, even when the precise words were not.

All in all, The Pirates of Penzance is a great piece of summer entertainment; it’s probably good for the whole family, as long as everyone can sit still for two and a half hours, minus one intermission.

One thought on “The Pirates of Penzance”