The Orpheum Theatre’s production of Cinderella dazzles with the timeless charm of a grandiose Broadway musical. A breathtaking set and remarkable costume changes—coupled with the distinct ballads of Rodgers and Hammerstein—make the show a delightful theatre experience for audience members of all ages. 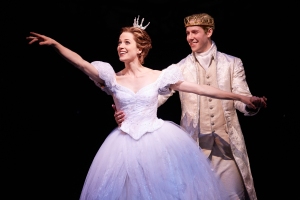 But those hoping to be swept away in a classic fairytale should consider themselves warned. The Tony Award-winning Broadway musical may be predictable, but is far from conventional. Central to the production’s modernization is the development of Cinderella herself. The classic rags-turned-riches character of the traditional version can only be described as elementary next to the more more ambitious leading lady of the 2013 rendition.

The spirited “Ella” hopes to do more than escape the clutches of her wicked stepmother and stepsisters. She longs to change the world, and as it turns out, falling in love with a prince is the perfect way to do it. Instead of accidentally losing a glass slipper as she hastily leaves the ball, Ella deliberately positions her slipper on the stairs, making her an agent in the happily-ever-after that ensues.

Prior to meeting Ella, the endearing Prince Topher lacks the self-assurance necessary to lead his kingdom. With Ella’s encouragement, he embraces his responsibility as King, and reflects the fearlessness and compassion inherent in his future Queen. Ella’s kindness extends even to her stepmother and stepsisters, who are in the end forgiven for their wrongdoings.

Even with its modern flare, Rodgers and Hammerstein’s Cinderella remains a romantic, endearing tale that proves dreams really can come true. Don’t miss out on this radiant production!

Ellen Ferry, a recent graduate of Augustana College in Sioux Falls, SD, is passionate about singing, swing dancing and theatre. She enjoys her day job as a member of the Human Resources team at Lifetouch.