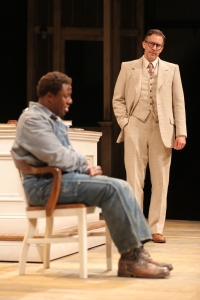 Guthrie Theater’s new artistic director Joseph Haj could not have chosen a more timely and relevant play to open his first season than Harper Lee’s To Kill a Mockingbird, now through October 25 (recently extended) on the Wurtele Thrust Stage. As he states in the program’s introduction, “There is a timeliness to our production, given the recent release of Go Set a Watchman, and we find ourselves with an opportunity for real critical analysis of where To Kill a Mockingbird sits in the arc of both literary importance and racial discourse in our country.” Set in fictional Maycomb County, Alabama, in 1935, the events are seen through the eyes of Scout (Mary Bair), the young daughter of lawyer Atticus Finch (Baylen Thomas), with commentary and scene-setting by sympathetic neighborN Miss Maudie (Stacia Rice). The town is obsessed with the upcoming trial of Tom Robinson (Ansa Akyea), an African American man accused of raping a white woman, whom the town judge assigns Atticus to defend in court. The play revolves around the Finch’s neighborhood and the trial itself. Neighbors and other town characters populate the stage and offer opinions of the day, conveying the rising racial tensions that threaten to break the town apart.

For me, the power of this stage adaption by Christopher Sergel was in experiencing the end of childhood innocence in face of overwhelming violence, injustice, ignorance and prejudice. The three child actors — Mary Bair as Jean Louise “Scout” Finch, Noah Deets as Jeremy Atticus “Jem” Finch and Isaac Leer as Charles Baker “Dill” Harris — were outstanding in their roles, with a special mention given to Bair, who captured Scout’s precocious bravery and wise empathy (they alternate performances with Isadora Swann, Lorenzo Reyes and  Nathan Turcotte). Baylen Thomas was likeable as Atticus Finch, but mostly failed to convey the barely-contained anger, fear and righteous indignation of our beloved literary and movie hero. Granted, they are nearly impossible shoes to fill: In 2003, the American Film Institute voted Atticus Finch, as portrayed by Gregory Peck in the 1962 film adaptation, as the greatest hero in American film.

While the play does not shy away from exposing 1930’s racism (the “n” word is used freely throughout) and the murder of innocent African-American men sanctioned by the American justice system, other timeless themes emerged in the telling of the story. Namely, the abuse of the most vulnerable of our society by the stronger “bullies,” who are often propped up and supported by those fearing change and loss of power in face of progressive forces. As the main victim in the play, Akyea plays Tom Robinson with a powerfully resigned honesty and dignity. Mayelle Ewell (Ashley Rose Montondo), the white woman who accuses Tom Robinson of rape, is not a sympathetic character–she is a manipulator and a liar. However, an unrecognizable and superb Montondo transforms into a quivering mass of fear, vulnerability and ignorance as she testifies about the incident, barely concealing the trauma she experiences at the hands of her white trash father, Bob Ewell (Bruce Bohne). The town Boogie Man, “Boo” Radley (Michael Booth), is also a vulnerable, abused and misunderstand member of society. Maybe that’s why the opening-night audience applauded and hooted when the town sheriff, played by Chris Carlson, finally went against convention and his official duties to protect an innocent from further victimization. The outcome of the trial is pre-ordained and raises the issue of revolutionary versus incremental change when faced with injustice. Atticus Finch understands the limits of his power but is,,nonetheless, a compassionate, humble hero to the forces for change in the town and a hero to his loved ones.

To Kill a Mockingbird offers a powerful and moving night of theater that allows us to experience both the tragedy and hope, the best and the worst humanity has to offer. The hope lies in the final curtain wave of Mary Bair, reminding us that fierce courage and empathy may be the keys to defeating ignorance.

Post-play discussions follow some performances. The discussion is free and allows audience members to learn about and discuss the play with actors, artists, and theater staff.

To Kill a Mockingbird adapted by Christopher Sergel, based upon the novel by Harper Lee. Directed by John Miller-Stephany. Set design by James Youmans, costume design by Mathew J. LeFebvre and lighting design by Marcus Dilliard. September 12 – October 25, 2015 on the Wurtele Thrust Stage at the Guthrie Theater, 818 2nd St S, Minneapolis. Tickets start at $17 at  guthrietheater.org or box office at 612.377.2224. As available, public rush tickets (the remaining seats in the house) go on sale 15-30 minutes before any performance.

Back to AisleSay Twin Cities

2 thoughts on “To Kill a Mockingbird”