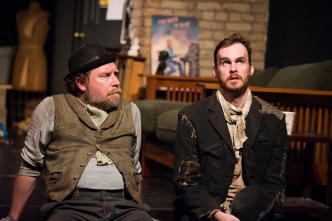 Sam Landman and Gabriel Murphy in “Waiting for Waiting for Godot” with Loudmouth Collective. Photo by

By BRYCE + LIZ BYRON. Set in the green room of a production of Waiting for Godot, the play Waiting for Waiting for Godot re-imagines the themes of Beckett’s absurdist play through a lens of modern “show business”. The play’s action unfolds as the two understudies, Ester and Val, wait for their chance to go on stage and finally make it big.

The play does a great job of taking small observations about the sometimes absurd nature of actors’ lives and blowing them up to to surreal proportions for comedic effect. For example, the everyday trouble of a costume not fitting quite right takes over the whole stage in an epic battle of Man vs Vest.

I’m not usually a fan of physical comedy, but one simply must admire the pure skill with which Sam Landman and Gabriel Murphy play their parts. As the older, more cynical Ester, Landman is blustering and indignant as he moves across the stage. He has his timing down to a T, and has a face so expressive that he has but to twitch his nose to convey massive emotion. Murphy is quieter as the younger, more naïve Val, but despite his character’s more reserved nature, he is just as expressive. The two bounce off each other, both verbally and physically, as naturally as if they’ve been doing it for years.

For me, the part of the play that shone the brightest was Dave Hanson‘s script. Fans of or anyone familiar with Beckett’s play will appreciate the skill with which Hanson has re-imagined the play; Val and Ester are waiting for the big break that may never arrive just as Vladimir and Estragon wait for a man whose arrival is similarly unlikely. Their conversation is just as fragmented and meaningless, and while Hanson’s characters may touch on a deeper meaning more directly than Beckett’s do, the blend of absurdist comedy and true-to-life tragedy is still there. The way that Hanson re-situates Beckett’s story into a very real world, while echoing and reformatting lines directly from the play is massively impressive, and entertaining to observe.

Loudmouth Collective only does a couple of shows a year, and their runs are pretty short, so go while you can. Waiting for Waiting for Godot is clever and delivered with incredible skill. Highly recommended for theatre folk, Beckett fans, appreciators of physical comedy and/or comedy about nothing (Seinfeld fans, make haste!), and anybody who enjoys a brief dose of absurdity (show clocks in at about 100 minutes including intermission).

Waiting for Waiting for Godot by Loudmouth Collective runs September 23-October 2, 2016 at the Open Eye Figure Theatre, 506 E 24th St, in Minneapolis with an additional pay what you can show on Monday September 26th. Tickets are $20, or $15 with your Fringe button at (651) 243-0250, at the door, or at http://www.loudmouthcollective.com/tickets