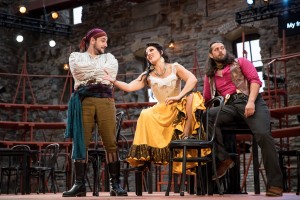 Mill City Opera at the renovated Mill City Museum Ruin Courtyard is a breathtaking and unique summer treat. The stage is set amidst the outdoor ruins of the old factory and the nearby river sounds and evening light cast a magical spell over the production. George Bizet’s Carmen, now playing seven shows through July 24, is sexy and dramatic, making it an ideal first-time opera experience. Audrey Babcock delivers the quintessential Carmen with her dark beauty, soaring vocals and fiery temperament. The stage direction (Fenlon Lamb) and costumes (Sarah Bahr) wonderfully capture the heat and passion of southern Spain and gypsy culture. Adam Diegel as the jealous, mama’s boy male lead, Don José, had an unfortunate bout of illness during the final two acts on opening night, which forced him to lip-sync his vocals while Adam Lowe sang from the side of the stage. Despite the mishap, this is a first-class overall operatic performance and near perfect theater experience.

Carmen is one of the most popular and frequently performed operas in the classical canon; the “Habanera” and the “Toreador Song” from are among the best known of all operatic arias–you’ll recognize them immediately. The opera is set in 19th century Spain and deals with the obsessive love and jealousy of Don José (Adam Diegel), who is lured away from his duty as a soldier and his beloved Micaela (an excellent Karen Slack) by the cigar factory-bad girl Carmen. Don José later joins the smugglers with whom Carmen is associated but is driven wild by jealousy. Carmen is a complex character–at once an independent, confident woman who insists on determining her own fate and a needy manipulator who can’t exist without a constant parade of lovers. The drama comes to a head when Carmen makes clear her preference for the bull-fighter Escamillo (Luis Orozco). The opera mixes light, comedic moments with dramatic themes of abusive jealousy, mutiny and death. Rounding out the excellent cast are local, national and international artists including Benjamin Dutcher, Nadia Fayad, Siena Forest, Andrew Lovato, Eric Morris, Benjamin Sierverding, Andrew Wannigman, a chorus of 24 singers, dancers and full, live, on-stage orchestra. The opera is sung in French with a scrolling English translation banner above the stage.

New this year, Mill City Summer Opera will present “Carmen for Young Audiences” on Wednesday, July 18 at 10:30 am at the Mill City Museum. The performance will be a shortened version of the story with material from Carmen geared for children. This special one-hour show, featuring Nadia Fayed in the title role and a smaller cast, introduces the concept of opera to children and includes audience participation as well. Singers will be in costume and will be accompanied by piano. Tickets, available at the door, are $5 for adults and free for children.

The breadth and depth of theater options in the Twin Cities never cease to amaze me.