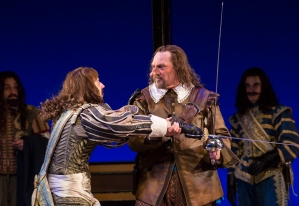 Honor. Love. Wit. Fencing. Panache. Whether you’re familiar with this tale from High School English class, the film adaptation Roxanne starring Steve Martin, or even if you’ve never been introduced to the scholar/soldier with the protruding proboscis, the Guthrie Theater’s production of Edmond Rostand’s Cyrano de Bergerac will delight you. The entire ensemble’s excellent comedic timing, stage combat, and occasional bouts of song draw the audience into the legend of the titular character. Standing out for their hysterical comedic choices in their various roles are Nate Cheeseman and Charity Jones.

Jay O. Sanders delivers an excellent performance as the clever and quick-tempered Cyrano. From his first entrance, it’s clear that (while his sword cuts as cleanly as any) his words are his greatest weapon. Second only to Cyrano’s love of language comes his love for his old friend and cousin, Roxane (Jennie Greenberry). From the very beginning Cyrano shows his sense of honor in defending not only his own, but that of Roxane. He is finally convinced by his dear friend and commanding officer, Le Bret (Remy Auberjonois), to confess his love for Roxane despite his “ugliness” and decides to reveal his true feelings through a love note. However, before he is able to do so, she confesses that she is in love with another soldier, a young cadet named Christian (Robert Lenzi). After she begs him to keep him safe, Cyrano agrees and takes the young man under his wing. Christian, although his love for Roxane is as true as Cyrano’s, does not have the gift of tongues or the wit that Roxane requires in a suitor, and Cyrano ends up wooing her for Christian with the content of his own heart.

Greenberry and Lenzi are wonderful as the young lovers. Christian’s nervous babbling when faced with the object of his affection rings as true as if he were a modern 20-something. Greenberry also brings a modern zest to Roxane. She is a woman of means, a woman with a keen mind who longs for companionship with a man who respects her and matches her wit. However, this story takes place in 1640 during a war, and Roxane is unable to control her own future, let alone those of the men she cares for. Cameron Folmar plays another suitor for Roxane’s affections, Count de Guiche. Although married, the Count wishes to take Roxane for himself (hey, it was 17th century France, are you really that surprised?). He stands as the foil for Cyrano and Christian and the ultimate barrier between them and happiness with Roxane.

This adaptation by Director Joseph Haj blends the poetic verse of Rostand’s original work with a more modern sensibility while still displaying the true message: true beauty is found within. The ingenious and adaptable set design by McKay Coble also accomplishes this mission.