Since its Broadway debut thirty years ago, The Phantom of the Opera has had more than 65,000 performances, seen by 140 million people in 35countries, in 160 cities in 15 different languages. It is no secret that this show has been a hit around the world for many years and this magical new production, now showing at the historic Orpheum Theatre, is truly a visual and musical masterpiece.

This production of Phantom is quite a large one. The show is touring with 20 semi trucks hosting the most extravagant set I have personally ever seen, including more than 1,200 costume pieces, 120 wigs, and the ever exciting and exquisite chandelier. I had the honor of a backstage tour after the show, courtesy of sound tech Skip, to get an up close look at the magical work of Paul Brown (set design). Phantom is working with some seriously ginormous, supremely executed set pieces and splendor of watching it all in action is reason enough to get out to see this production.

The standout performances of Derrick Davis (The Phantom) and Trista Moldovan (Carlotta) are even further reason to get out and enjoy the splendor of this show. Moldovan has captured the prima donna character of Carlotta perfectly and has the voice to match. She has a commanding stage presence that was a joy to behold and although she may portray an unlikable character, her voice and performance definitely left me wanting more.

I had the pleasure of speaking with Derrick Davis after the show. Davis told me that has starred as The Phantom on this tour before, from 2016-2017, and was honored that when he re-auditioned he was asked to come back as the Phantom to close the tour. We also spoke about what the most difficult part, and his favorite part, of being in this production are. Davis had this to say;

“My favorite part about portraying the phantom is that I get to work to bring to light the humanity of the character. The most difficult would have to be singing “Music of the Night” because of how important the storytelling aspect is, and because it is musically challenging as well.” Davis’s performance was inspired and outstanding. He created such an emotional experience and has a voice that is truly fitting for an “Angel of Music”. 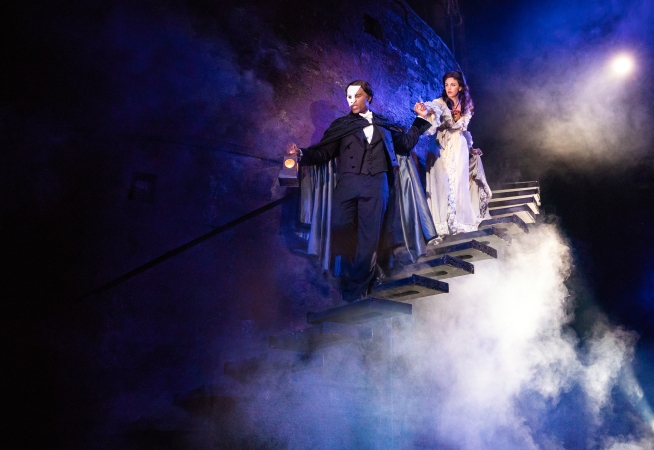 I implore you to get out to The Orpheum and witness the splendor and magnificence that this production and cast have to offer us. I can promise you that this tour is unlike any version of The Phantom of the Opera you have seen before, and even if you have seen this specific production – it is well worth seeing a second time around.