…This is a practise
As full of labor as a wise man’s art,
For folly that he wisely shows is fit.
But wise men, folly-fall’n, quite taint their wit.
-Viola, Twelfth Night 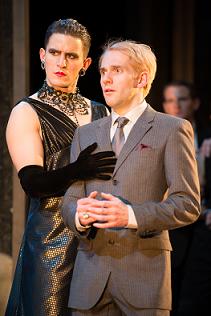 In Act III of Twelfth Night, Shakespeare offers a warning to any potential fools in the audience. Substitute “fool” for “theater company” and I believe the message still applies. Many capable theater companies have “taint[ed] their wit” attempting a Shakespearean comedy, resulting in productions that result in more polite chuckles than belly laughs. For this reason, I’m always hesitant to see Shakespearean comedies. There’s nothing worse than watching what was once a raucous and raunchy comedy fall apart.

So it’s always a pleasure to see a comedy that works. From the beginning of Propeller Theater Company‘s production at the Guthrie, it is clear director Edward Hall understands that true humor depends on darkness. While both the first and third acts start with the house lights still up, the tone quickly feels sinister as a chorus of masked men enter stage. The low lights make the actors’ faces appear deformed. The chorus never truly leaves, even as actors switch places; during the majority of the scenes, a masked man or two lingers on stage, watching the action.

And the presence of constant darkness makes sense, as life during Shakespeare’s time certainly had its share of pain and suffering. By the time Shakespeare wrote Twelfth Night, The Globe Theater had been closed at least once for the plague and Shakespeare had lost his son, Hamnet. Twelfth Night recognizes and depends on the darkness that surrounds it. As with most of Shakespeare’s comedies, it begins with disunity and separation: two identical twins, Viola and Sebastian, have been torn apart by a violent shipwreck. To survive, Viola takes on the guise of a eunuch and becomes a servant for a Duke who pines after a Countess. A series of delightful identity confusion and love triangles occur. But like The Taming of the Shrew, the other Shakespearean comedy being performed in repertory at the Guthrie, Twelfth Night delights in torture; a secondary plot revolves around the teasing and subsequent torture of Malvolio, a pompous steward in Olivia’s household.

It is in Malvolio, richly characterized by Chris Myles, that Propeller’s version of this oft-performed play truly shines.  Maria, a servant to Countess Olivia, and her conspirators begin their teasing as a lighthearted game. The scene in which Malvolio finds his letter is delightfully staged, and the reveal in which Malvolio arrives “cross gartered” had the audience gasping and crying. The party scenes in this production feel truly raucous, and the actors fully embrace the bawdy sexual humor. But then Malvolio’s torture begins, bringing with it a distinct shift in tone. Without giving too much away, Propeller’s was the first production of Twelfth Night I’ve seen where Malvolio was, as Olivia remarks, “most notoriously abused.”

It would be an exaggeration to call this a “dark” play; the actors’ frenetic energy, combined with the novelty of seeing an all-male company handling the various gender-bending scenes, makes it a lively night at the theater. While it would have been helpful for the production to spell out a bit more of what happens at the beginning (several people in the audience were confused about basic plot points, a sign that the set up was not as clear as it should have been), if you have a basic knowledge of the plot beforehand you’ll appreciate this version of the play. Just don’t say I didn’t warn you about Malvolio’s garters.

One thought on “Twelfth Night”